Photostory: Making Mental Health & Well-Being for All a Global Priority

The world is facing increasingly dire social and economic inequalities, conflicts and violence, large-scale health emergencies, diseases, and many other humanitarian situations, leading to a global mental health crisis. During 2021 84 million people worldwide were forcibly displaced, and according to OCHA, 274 million people will need humanitarian assistance and protection by the end of 2022. This number is a significant increase from 235 million people a year ago.
In the midst of the COVID-19 pandemic, these combined factors have created a global crisis for mental health, fueling short- and long-term stresses and undermining the mental health of millions.

This World Mental Health Day, we must re-commit and invest to make mental health and well-being for all a global priority. The full spectrum of mental health needs should be met through a community-based network of accessible, affordable and quality services and supports. We shine a light on the people who need it most. 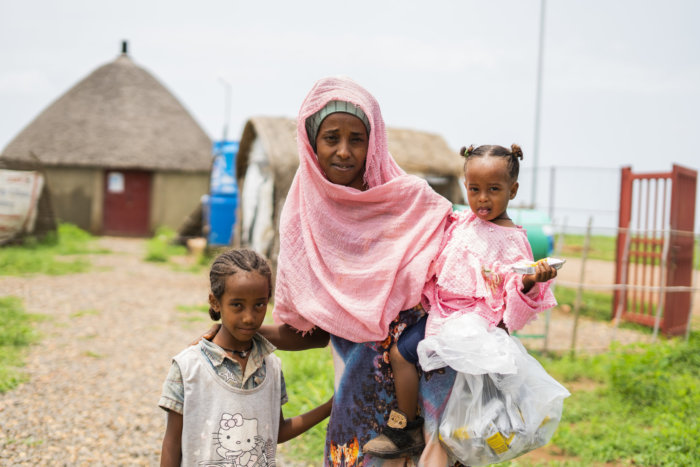 Gannat arrived in Um Rakuba refugees camp in January 2022 and lives at the Ethiopia-Sudan border with her husband and four daughters. She is pictured here with her daughters Betol and Kisanet. “We do get basic services, but we still face shortages, even of food. The lack of jobs makes it difficult to have any additional support for the family,” she said.

Over 18 000 refugees who fled Ethiopia’s Tigray region are housed in the camp, which was set up in late 2020. More than 5.2 million people in Tigray, Ethiopia, are in dire need of humanitarian support, including health care, due to the conflict that erupted at the end of 2020. Over 16 million people in drought-affected areas require multisectoral assistance at least until the end of the year, and beyond.

WHO helps to support the population in Um Rakuba by providing medicines and other health supplies, as well as mental health monitoring. So far in Ethiopia, 22,000 individuals – including nearly 16,000 children – were reached with mental health and psycho-social support services. 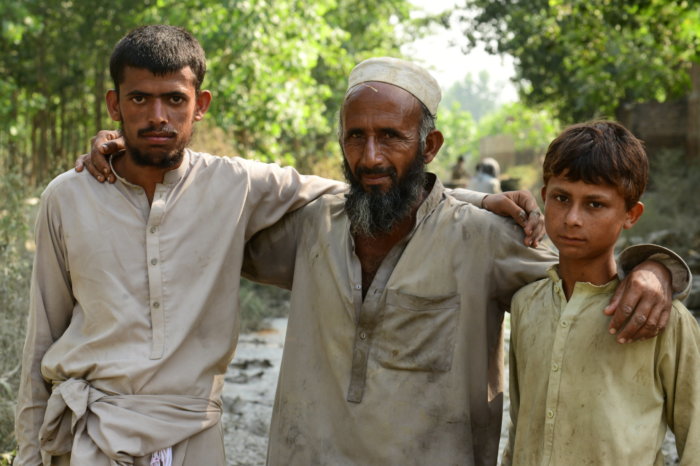 In Pakistan, Subhanullah and his sons stopped along a road while moving livestock and belongings from their homes to a higher ground after their village in Charsadda district was affected by recent flooding.

Catastrophic floods in Pakistan in August 2022 killed some 1,400 people, destroyed more than half a million homes and displaced over 660,000 people into camps. Many more people are displaced in host communities. More than 750,000 livestock – a critical source of income for many families – died after the rainfall, which in August was more than five times the national 30-year average in some parts of Pakistan. Some 33 million people have been affected, and access to many vulnerable communities was cut off as hundreds of bridges and thousands of kilometers of roads were destroyed or washed away.

With the health system hanging in the balance, WHO life-saving emergency interventions alone cannot address the medical needs of the entire population once the flood water recedes. A structured “building back better” approach to health systems recovery, including mental health as an integral part, is needed to ensure that the rebuilt public system is stronger, safer, agile and more resilient to disasters. 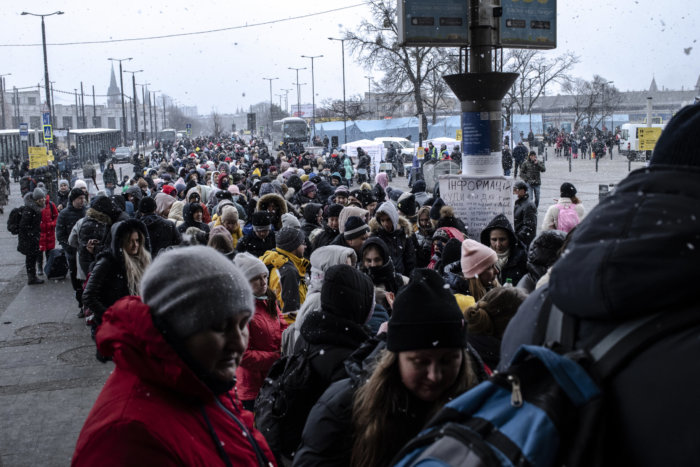 On 7 March 2022, people lined up for hours to enter the main railway station in Lviv, Ukraine, trying to escape the Russian invasion and seek safety.

From February to June 2022, 6.2 million people were internally displaced in Ukraine and 8 million refugees had left Ukraine.

WHO and partners have supported the coordination of emergency medical teams across Ukraine, Poland and the Republic of Moldova. They also worked to improve the mental health of Ukrainians. Community Mental Health Teams supported by WHO have been providing long-term care for people who had mental health conditions before 24 February 2022. The teams received additional training in the management of stress-related mental health conditions, as they continue to provide care in challenging new circumstances. Nearly 12,000 consultations by mental health and psychosocial services were supported by WHO during that period. 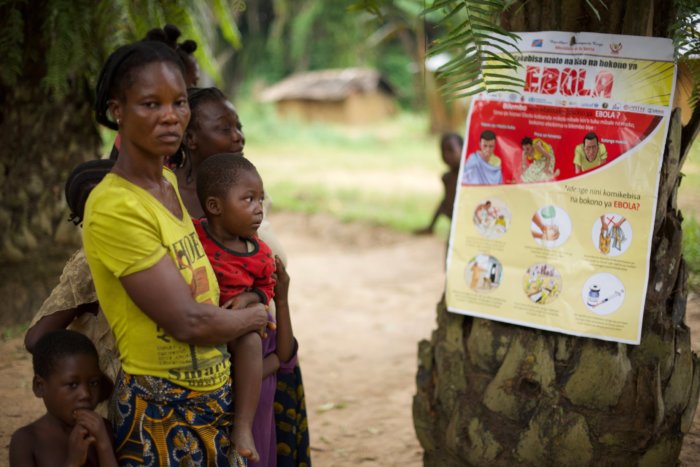 A villager in Bakonga, a village about 70 km from Itipo, DRC, during a sensitization session in 2018.

The response to the Ebola outbreak in remote areas included use of measures such as early identification, isolation and care of cases, contact tracing, safe and dignified burials, and culturally appropriate community mobilization (including risk communication, community engagement, and social mobilization).
Ebola is a traumatic illness both in terms of symptom severity and mortality rates. Those affected are likely to experience psychological effects due to the traumatic course of the infection, fear of death and the experience of witnessing others dying. It can have a significant impact on the wellbeing of those affected, their family, community members and the health workers treating people with Ebola.

Fear and stigma of Ebola are contributed to by cultural beliefs, widespread fears due to high infection risk, lack of information and misinformation.

WHO and partners have continuously provided financial resources, guidelines and training materials for responders to provide humane, supportive and practical help to communities affected by the Ebola outbreaks in DRC. 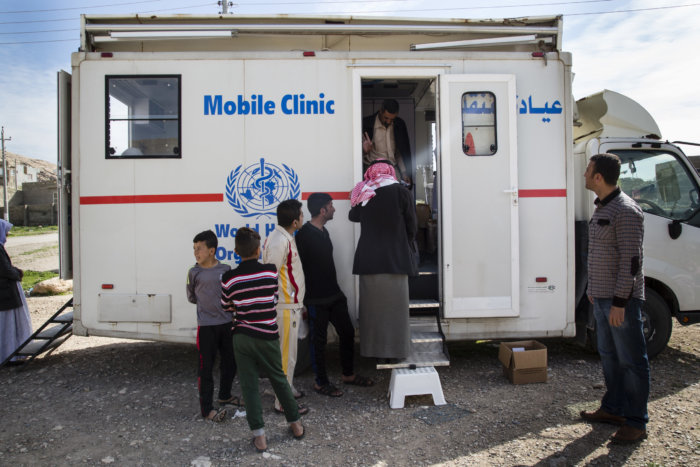 Internally displaced Yezidi men, women and children lining up at a WHO-supported mobile clinic to get monthly medical attention in Sienna village, in the Duhok region of northern Iraq (2018).  Many Yezidi people lived in and outside of camps after they escaped atrocities committed by ISIL in 2014.

In 2018, WHO was supporting six mobile clinics in the region that serve about 40,000 people living outside of refugee camps.

Iraq, like many other countries, spends on average only 2% of its health budget on mental health. On average, people in Iraq pay out-of-pocket expenses of at least 20% towards the cost of mental health services. The situation is worse for low-income households and other vulnerable groups as the cost of this essential care can cause financial hardship.
During the COVID-19 pandemic, WHO worked with the government of Iraq, and with partners, to include mental health care as part of the continuity of essential health services. WHO is also providing psychosocial support skills training for first responders. 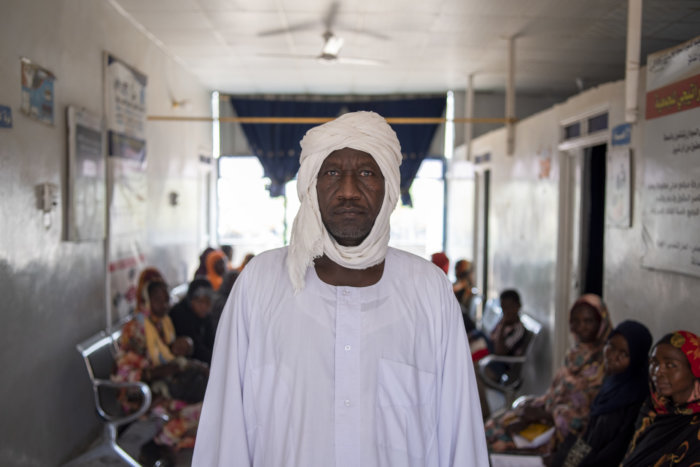 Adam works as a translator in Abu Shouk IDP camp in North Darfur (April 2022). Many of the residents of the camp, in particular the older residents, do not speak Arabic and require help to communicate with health facility staff. A new report found that at least a quarter of health and care workers surveyed reported anxiety, depression and burnout symptoms.
Protecting and safeguarding this workforce is also an investment in the continuity of essential public health services to make progress towards universal health coverage and global health security.

In 2003 conflict broke out in Darfur and forced millions to flee their homes. Many are still living in situations of protracted displacement in camps like Abu Shouk. As of 2022, there were over three million internally displaced people (IDPs) in Sudan, most in Darfur, Kordofan and Blue Nile, which were the epicenters of localized conflict over the past 17 years.

As the WHO Foundation continues to harness the power of collaboration and partnerships to raise funds and to support WHO and its team members on the ground, we are striving to cooperate on a multilevel approach and through various initiatives.

Mental health, emergency response, and preparedness are some of our key areas of work. We support WHO through our plan to co-create a Community of Practice (CoP) for mental health at work to bring together employers who are driven to champion employee mental wellbeing, but also through #Sports4Health. We also actively support WHO’s emergency work, which includes mental health assistance for those who need it most, through our Health Emergencies Alliance, the Ukraine health emergency appeal, the Sahel & Horn of Africa health emergency appeal or the COVID-19 response.

To get involved and partner with the WHO Foundation, please learn more on our website or contact us at partnerships@who.foundation.